I took a moment recently to take of pictures of blooms around the old house in West Linn. I try to stop and remember to take pictures in the midst of scraping old paint and wall paper off of the interior walls. I love to look around and imagine what new flower beds I'll create and what new edible plants I'll incorporate into the backyard.

One of the earlier projects that was completed in March was the removal of two large Sumac trees that were heavily shading the house and much of the backyard. The old trees were planted by the great-grandfather who built the home because they were fast growing and would provide shade, probably around the time the home was built in the early 1930's. Some of the limbs were rotten and during a windstorm in the past, a large limb dropped on the house and caused quite a bit of damage. Removal of these two tree's was required for safety and to reclaim the backyard from shade. 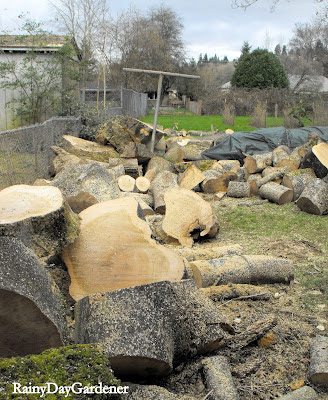 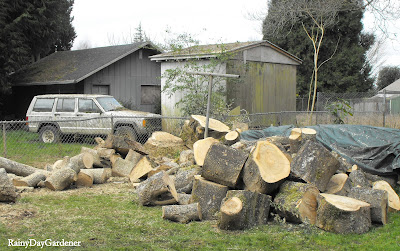 The wood has been hauled out and we will be starting from scratch in back, with a lot of room to create a nice cobblestone patio and new privacy fence :) I have visions of using old pallets to built a fence with flowering vines or maybe goji berries growing up and around the fence.

Currently I have added these edibles to the back yard:
Combo Dwarf Apple Tree
Combo Dwarf Pear Tree
Service Berry
4 Blue Berries with plans to add 2 more bushes.
All of my raspberry canes from Rainier house to the rows of existing raspberries in West Linn.

If I could just spend all of my time working on the yard and build my gardens I'd be such a happy clam, but drat, we do have to live 'in' the house so I suppose it is reasonable to make that the priority.