Some of you might remember it was with great enthusiasm that I mixed soil and started seed, oh back in February. In my minds eye, I was going to have 8 inch tomato plants by this time.

So much for that plan. 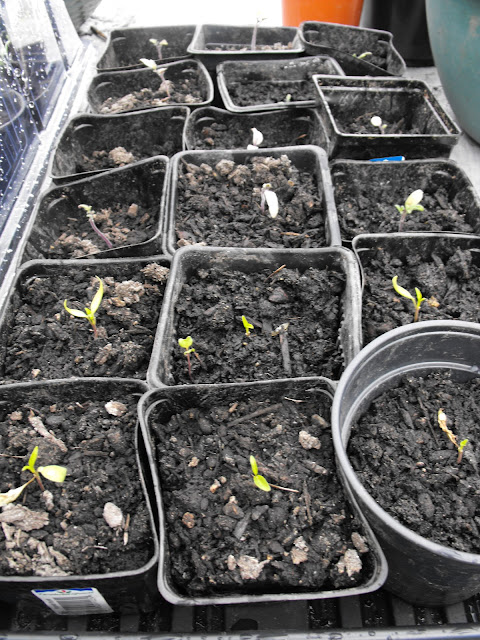 Yes, please do strain your eyes to see the damn things. Oy! So, I found that they sprouted with ease and then as they were inside the house near a window in a mini-green house, they got leggy. Just not enough light. About mid-April, I carefully re-potted each tom and pepper into their own pots with yummy organic fertilizer. I was carting them outside on any day that had a glimmer of sunshine. I got sick of it. Despite my efforts, they remain stubbornly small.
Bah!
So I kicked them to the curb. Well, not literally, but they have been relegated outside.  They are still in their protective mini-green houses and it does not appear that I've managed to kill them. Yet.

If I fail in my attempts to start tomatoes and peppers from seed this year, I'll buy plants and try again next year. It will still be far more cost effective to buy the plants and grow my own tomatoes rather than buy at a farmers market for saucing.

In other seedling news. Two weeks ago I haphazardly started seeds that the children had gotten free from a local nursery as well as some onion, pumpkin and heirloom squash I had and look. This is just from two weeks ago. They have been living outside in their mini-green house. 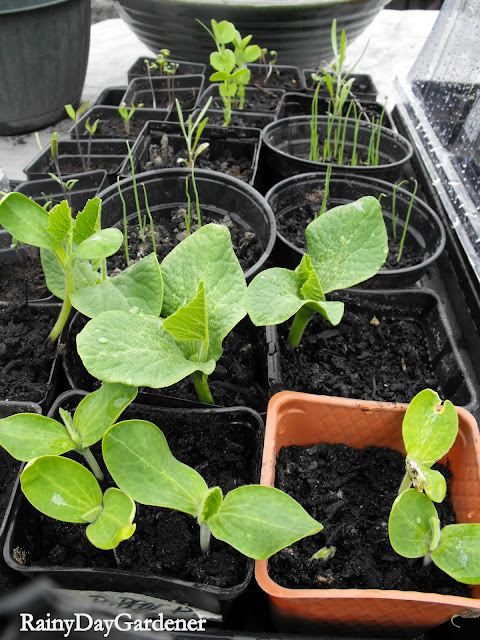 Well, it gives me hope that I'm not entirely inept at starting veggies from seed.