The once beautiful acer palmatum 'Twombly's Red Sentinel' has been succuming to verticillium wilt.

I noticed late, last autumn that one of the branches on the left had leaves that were brown and crispy (rather than aging gracefully like the rest of the tree). I thought nothing of it as there had been so much construction mess; both on the property to our left with the two big new homes being built and on the street in front of the house where new power and sewer lines were put in.

However, this spring, I could not deny the problem unfurling. The branches on the left fork of the tree were not leaving out. When the leaves did come, they were smaller sized and then some of the leaves simply withered away. 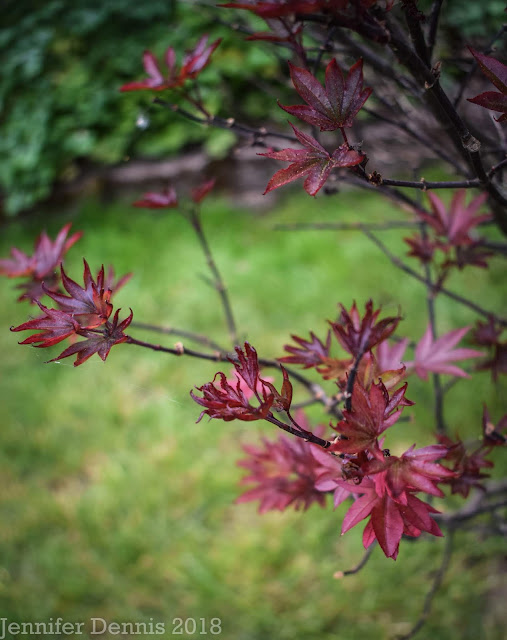 I planted this tree seven years ago, before my family even officially moved into the home. I was so proud of my selection. There was nothing like it in the greater neighborhood. The bright red color of the foliage was spectacular, especially in autumn.

It is unclear to me how the tree became infected, but nonetheless, infected it is. You can see at the base the tree is weakening. It is possible that the tree was damaged at the base during lawn mowing. In hindsight, I should have put a rock ring around the tree to keep the base safe.

Verticillium wilt is a soil borne disease.  Verticillium dahliae is the fungus that is the primary agent of the wilt. It is a common disease for Japanese maples. Once the fungus is in the soil, you can take steps to kill it by covering the area with plastic (for a long time) and let the sun heat the soil. 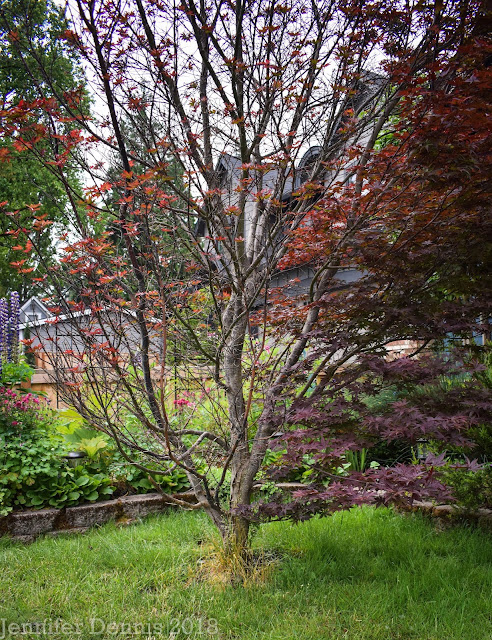 I am choosing to pull the tree out as the affected area is substantial on the tree and I do not see a way of keeping the tree alive, nor do I want spores of the fungus to spread to my other acer's.

After we pulled the tree out, I had the husband cut the trunk so I could see the damage.

It was very apparent when we cut up higher on the infected side of the tree. Verticillium wilt is the culprit. Damn. 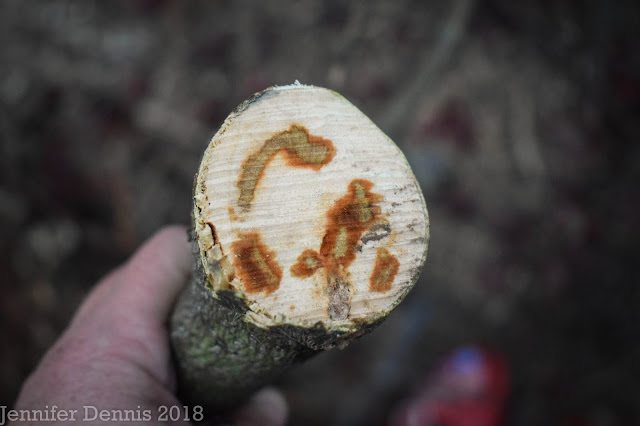 It's a strange thing, how a tree can become a part of the family. It broke my heart to pull it out of the ground.The humming birds have used it as a perch and resting place. I have noticed chickadee's and bush tits as well. Plus, it gave me a bit of privacy as I would sit on my front porch.

I will not plant a replacement tree in it's place. The front garden is truly postage stamp sized, so in the end, it may look less cluttered without the tree there. However, I will miss this beautiful red sentinel.

Here are some resources for identifying Verticillum Wilt. I will continue to update this post with additional materials as I find them.