New House Files, Part 1: What Have We Gotten Ourselves Into?

Why so quiet Jenni dear? You must be wondering...ok, I have an inflated sense of self but I'll tell you what's been happening in my neck of the woods the past few weeks.

I've been recovering from gall bladder surgery, which occurred two weeks ago. The procedure went smoothly and I'm starting to feel like I've got some energy and pep again! Woohoo!

At the same time, we've begun the work on remodeling the old house we plan to call home this coming July. I'll admit to not wanting to share pictures of this old place in it's current state because I'm embarrassed of how poorly it looks. Logically, I know we'll change all that and bring this home back to life, but the process will be long and I struggle with the lack of aesthetics the place currently has to offer.

My pride often gets in my way. I blame my Dutch grandparents who, after immigrating from Holland post WWII, carved a new life for themselves and their young family, purely through grit and hard work. They had no formal education past the 8th grade because the Nazi's closed the schools. My grandfather (Opa) worked in concrete/construction and my grandmother (Oma) cleaned homes for the wealthier Dutch families they knew. They were humble, but proud people. They always kept themselves and their residence in good condition.  These values were passed along to me. I know they would have rolled up their sleeves and dug into the work of rehab-ing this old house as I will also do, but dear friends, I admit to having been spoiled by our modern times. I've never taken on a project quite this big and it feels overwhelming.

So, I hope you'll be my cheering squad.

We've begun the work of moving my father in law out, as this was his home prior. With the interior clear,  we are beginning the work inside. I'll be detailing that in later posts.

This home was built by my husbands great-grandfather, Pete. He was an immigrant from Canada. He built this home during the late 1920's to the early 1930's. Prior to the home, the land was a holly farm. 90+ years later..random bit's of holly can still be found growing in the yard.

Old Pete worked at the nearby lumber mill along the Willamette River in what is now Oregon City. Plywood was the new 'wonder' material in those days. Pete used a lot of it. For example, the interior walls are plywood. I admit that those walls have held up well ;)

Pete and his wife, Nellie had beautiful gardens. Lot's of flowers and a great big Victory Garden that kept them fed during the lean years of the depression.

The yard has been unloved and fairly unused. I have grand plans to build raised vegetable garden beds next month and to bring some food production back to this property. 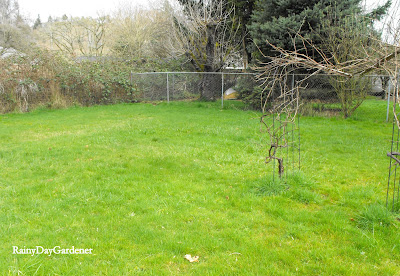 I am excited about the large yard space I will have to work with. It's the thing that has made me agree to make this move and take on all the work. In the above picture, there is a concord grape that was planted by Pete. It still produces a substantial quantity of grapes every year. To the back left of the picture, you can see I'll be battling the neighbor's rogue black berries, as they spill over the back fence. That home is for sale and my husband and I are hopeful the new owners will tidy up down the road. 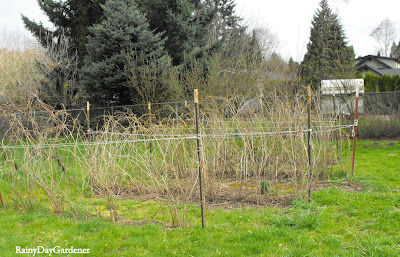 My father in law did plant something during his tenure in the home.  He brought raspberries from his prior home in California. They are good producers and I plan to dig up canes from the raspberries I've been growing in my current home to add another row and some variety.

There is so much to be done. I look around and know that between myself and my husband, we'll be touching every square inch of the home and yard to bring it back to life. 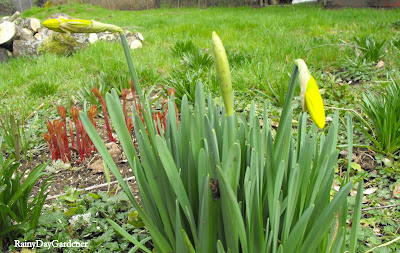 I hope that in a few years, my family will be able to pull into the driveway of the old house and feel joy at being 'home'. For now, it's time to roll up our sleeves and work.