Here at the Rainy Day Garden, we've had....no......rain......at.......all (ok..truthfully, 1 day of rain).  I've been wrangling the garden hose all summer and with good results. The weather, while dry, has been perfect for watermelons, cucumbers and tomatoes. 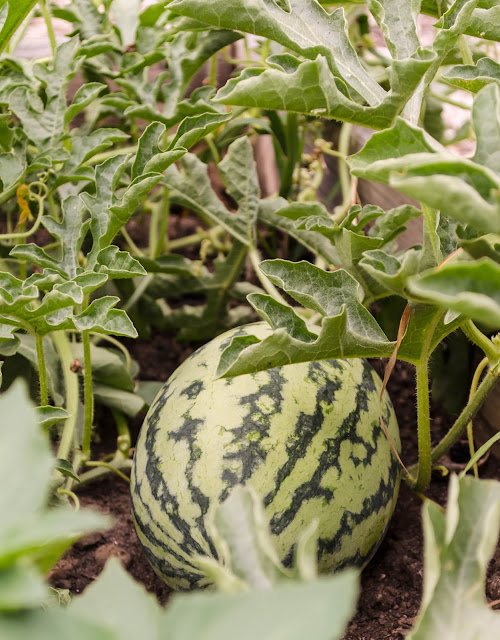 I have six plump watermelons in my dedicated raised bed and I do believe we'll have a tasty feast soon. If there was ever a year to grow watermelons, it has been this year. They love the heat and have been very happy. 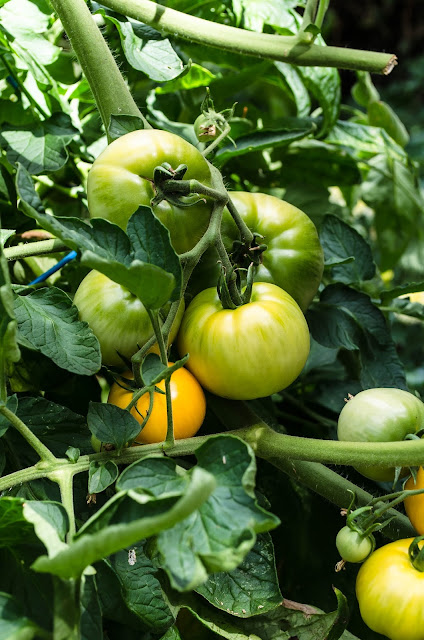 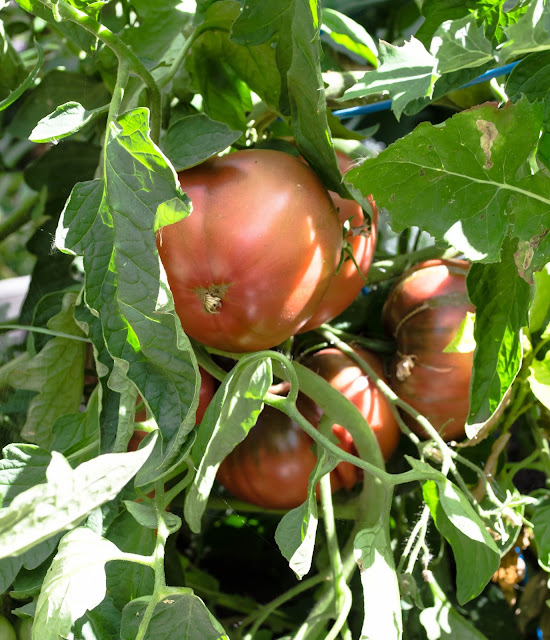 The heirloom tomatoes are ripening nicely. I use them for sauce and it looks like I'll have a nice batch to cook up starting this weekend.  What I really need is a heavy duty tomato cage. I've bent mine again. I am delighted with how plump the tomatoes are this year.

Not pictured are my onions. I've grown 'Cipollini' this year. They taste so good and store pretty well. I've already been pulling some to use in dinner recipes. 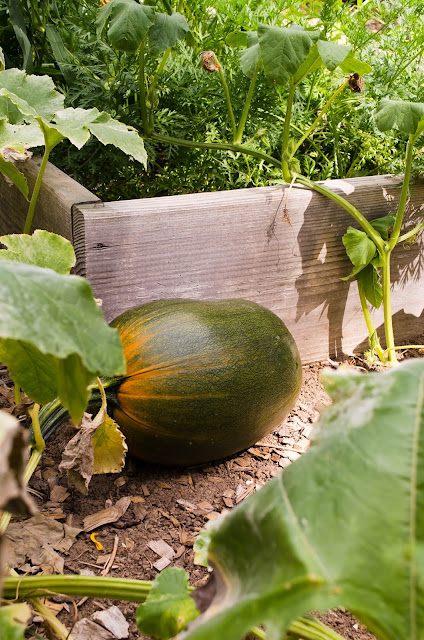 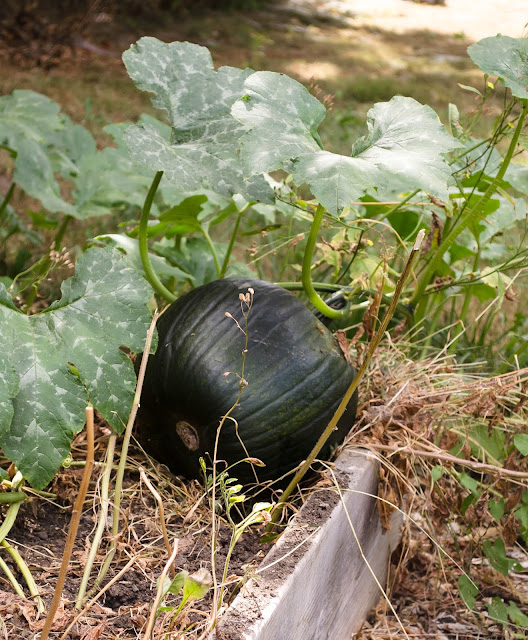 I have 6 - 7 good sized pumpkins that are just now beginning to turn orange. It's amazing how much those pumpkin vines sprawl out and in all of it, only six pumpkins. Well, it's my first time growing anything other than sugar pumpkins, so, I'm happy. They should be carving size and if that saves me a trip to the pumpkin patch...it's a win! I feel like I have a lot to learn about growing pumpkins. I did not self pollinate them as I have done with my sugar pumpkins in the past and despite my neglect, they are produced some fine looking fruit. 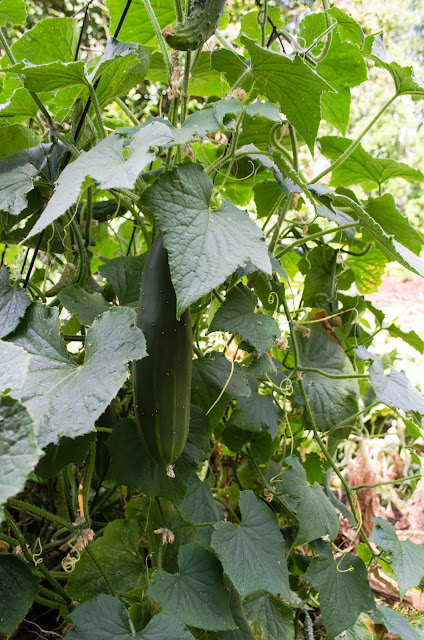 OY! I'm in cucumber overload. I've been passing them around the neighborhood. I'm only growing two plants, of the slicing variety, and it's amazing just how many cukes I've managed to get. Homegrown cucumbers are simply the best. No comparison to hot house grown store bought varieties.

I've also been growing sunflowers and a nice, 'bee' friendly' flower mix in order to lure those flying friends over to pollinate my vegetable garden. It's worked out really well. I'd like to add a few more raised beds to dedicate more space to flowers in the garden. My vegetable gardens have produced more this year than any year before and I think the introduction of the flower box in the middle of the gardens has had everything to do with this. 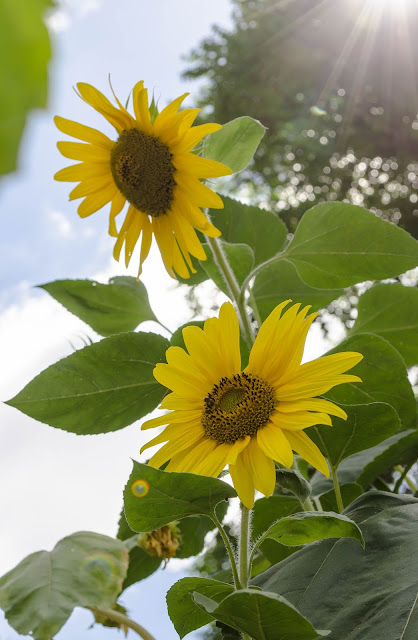 Most of my sunflowers this year were volunteers from last year. I kept most of them and grew bush beans underneath. (which I've neglected to pick and thus will have seed for next year...sigh). But the combo has worked out well. 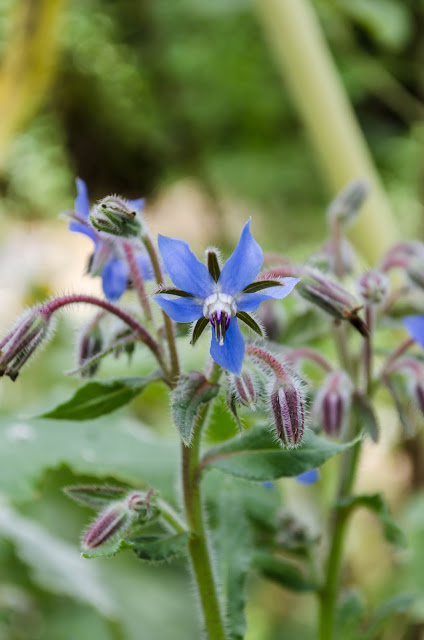 In my mixed flower box, borage (above) has been the most dominant plant. Zinnia's and cosmos are currently blooming as well. 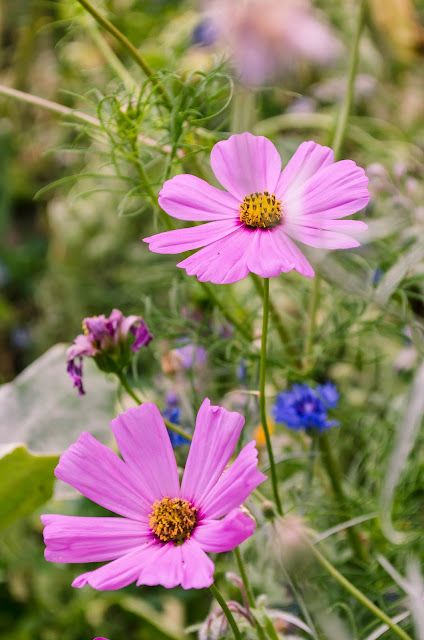 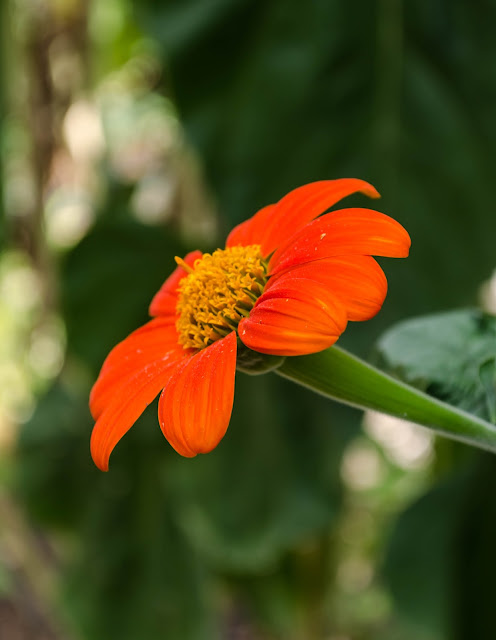 Lastly, my fruit tree's have produced this year.  The apple tree is very heavy. Homemade apple sauce is in my future. August is a busy harvest and food production month. 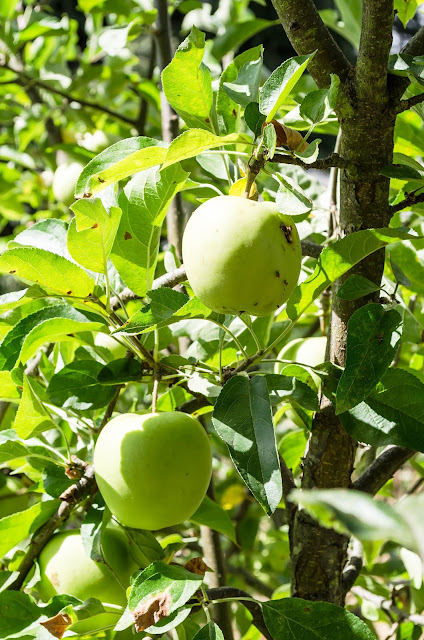 The pear tree is light. It was laden with fruit last year. Next year I expect it will be heavy with fruit again. 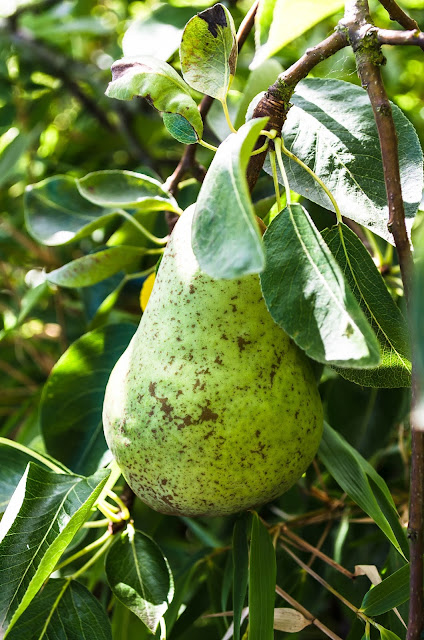 And that wraps up my organic garden tour. While it's been a lot of work this year, lugging the garden hose around, the pay off is worth it.