Make Way for the McMansions

Our little street is going through some changes. The home next to ours sold to a local developer and was subsequently, demolished.

This old house was in rough shape. It sat on a long, skinny lot much like ours. Most of the homes on our little street were built pre-1940, the majority of which were built between 1910-1930. It's an old, established neighborhood with all the good and bad that comes with it. Most homes are kept in good shape, but it is becoming gentrified (like many neighborhoods in the Portland Metro Area). We've just been lucky to have new families move into the older homes, valuing the character of the old home and land that came with it and restoring the home. (Much like my husband and I are doing.)

This old house really needed some TLC..a complete demo to the studs...but developers have other plans.

As it turns out, this local developer, ICON Construstion, has plans to demolish the home and put two in it's place, creating a flag lot. Our once private back yard will now have 2 towering homes looking down upon us...as will five other neighboring homes.

It's a dramatic change for our little corner of the world.

The home was taken down without much fanfare. You can see in the photo above, a tall row of 20+ cedar trees, remain...but not for long.

The cedar trees had provided shade, security and nesting options for a large variety of birds and were taken down mid-April...at the height of nesting season. 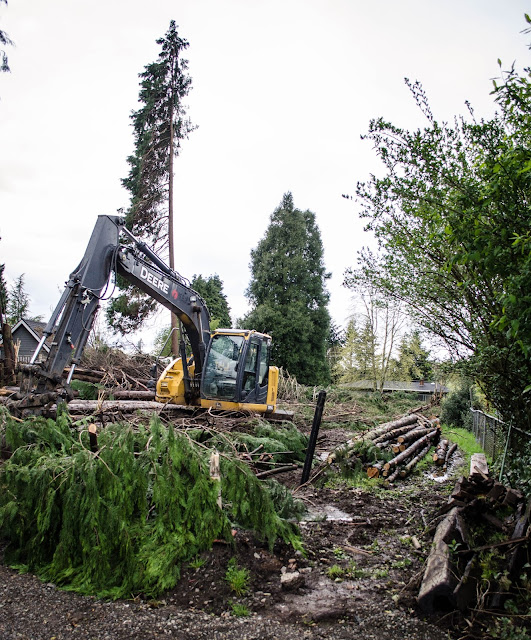 'Progress' marches on, despite those of us in the world who would rather salvage, rehab and care for things like homes, trees and yard space for gardens.

I've been sick about the loss of the trees, or more specifically, the timing of their destruction. Companies like this local construction outfit are profit oriented and need to be checked by local governments. New homes are built; old home are taken down...ok..but can we be more thoughtful about this? Can we ask our local governments who regulate the permitting of these applications to remove trees and demolish old homes, to consider the timing of these events and maybe to even prioritize and place value on old trees and open spaces?

The impact on my own home and yard is dramatic. The loss of the trees which provided shade and cooler temps during the hot summer and a habitat for the birds is overwhelming.

In response, I created something. It's a small thing but it satisfied my need to be proactive. 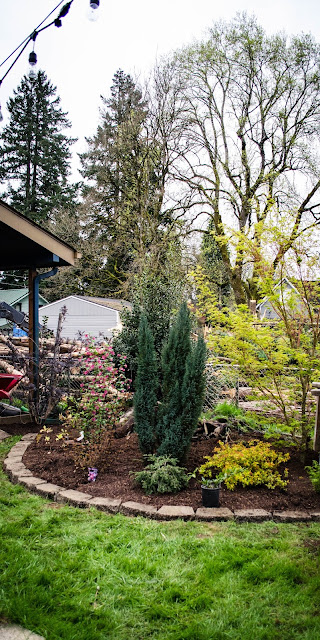 I built a garden bed. I had planted a coral bark maple and chamaecyparis lawsoniana 'blue surprise' about two years ago. I added a spirea, a native pink currant, physocarpus opulifolious 'coppertina', tsuga canadensis 'Gentsch White', Sambucus nigra 'Black Lace'. Also an oak leaf hydrangea and a native maidenhair fern. I dug out a border and added cottage stones (clearly I'm no pro) but it softens the blow of what will eventually be a nearly 3 story wall of a home in the future...a mere 7.5 feet away.

Behind this planting, is the stump of an old tree that spans both properties. It was cut down about six years ago. It's been tricky to figure out how to configure a planting around it. The chain link fence belongs to the property now under development. I sincerely hope if they are going to sell these massive homes for over 500k that they will put up a new fence.

A timely article showed up in the Oregonian yesterday about the plight of first time home buyers unable to find a home to buy anymore in the Portland Metro Area because all the new homes being built are homes like the ones that will be built next to us...massive beasts that no first home buyer can afford.