Voyage to The Netherlands Part 2

Our trip to The Netherlands in August, was kicked off with trip to the hometown of my Opa & Oma (grandpa & grandma). We were excited to visit Nunspeet and stay overnight with my cousin, Marina.

Marina, rents out the 2nd floor of her home to travelers. She was ready when we arrived, and let us borrow some bikes to ride into Nunspeet to visit the open air market and the childhood homes of my Opa and Oma.

Nunspeet is located in the region called 'Gelderland' in The Netherlands. The town is very historic, with  beautiful brick side streets, as you see in the photo above.

*My Opa (grandfather) was trained in laying brick roads. His father had taught him. My Opa, used his skills in concrete and brick laying to eventually find work in the Willamettte Valley, as construction for 1-5 was underway in the 1960's. I am the first born, American member of my Dutch family born, you guessed it, in the Willamette Valley area of Oregon.

Nunspeet is famous as a tourist destination for both the native Dutch and for visitors from other countries. It has lovely wooded places, where you can camp, a festive, outdoor market, and cute shops around a traditional town square with nice coffee shops and restaurants.

My cousin, Marina, pointed out the bakery that my Oma (grandmother) worked in during her teen years. It is owned by the same family that my Oma worked originally for. 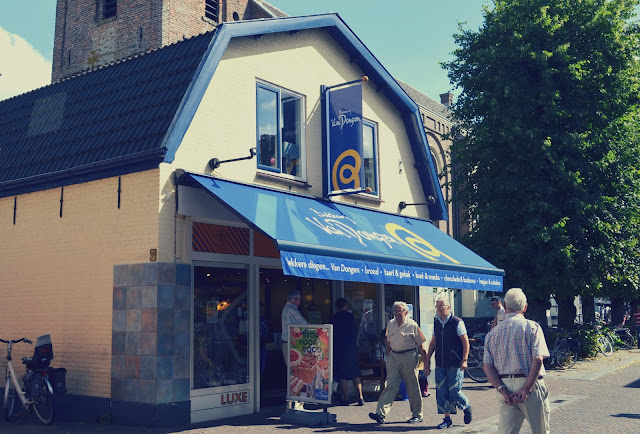 This visit to Nunspeet was very important to me. My Opa and Oma are no longer alive and for me to see where they lived, the streets and shops they frequented and worked in, had been the top of my places to visit in the world.

The street my Oma lived on was just down from the bakery.

My Opa and Oma spent the majority of their teen years, living in Nazi occupied Holland. I grew up hearing stories about what their lives wher like during that time, what it was like to have an army in your town, determining how you lived, with all the locally produced food going to feed that army. Meanwhile, their own families did not have enough to eat.

As I sat and looked upon my Oma's childhood home, it was amazing to me that even then, 1920's, the Dutch people conserved space and built what we call townhomes. While it is common to see a single (non-attached home) in the country side, where people farm, it is not in the city.

Then, we rode our bikes to the nearby school that my Oma attended.

The building is still used as a school, but now, a school for the arts. It was a beautiful building with gardens to the side and back. It was a place I could tell would foster artistic energy.

Then, Marina took us to display gardens owned by a local landscape designer of some fame in The Netherlands. I'll save those pics for another blog post about my trip.

Along the way, we marveled at the architecture of the homes. Soft lines, cottage gardens spilling out of doorways and around courtyards.


As we bicycled around Nunspeet, I was struck by how organized and efficient the Dutch people are. Planned roads and waterways and a spirit of industriousness permeated the communities that I visited in The Netherlands.

After my husband and I returned back to Marina's via bike from the visit to the display gardens, we had a nice, surprise visit from my Opa's youngest brother, Ger and his wife, Janny.

My great-uncle, who looks so much like my late Opa, took us to the home he and my Opa, grew up in. Ger is, gosh, I'm not sure exactly but probably born when my Opa was in his teens and working for the Dutch Underground Resistance during WWII.

He had some very sweet stories to share with me about his family home. 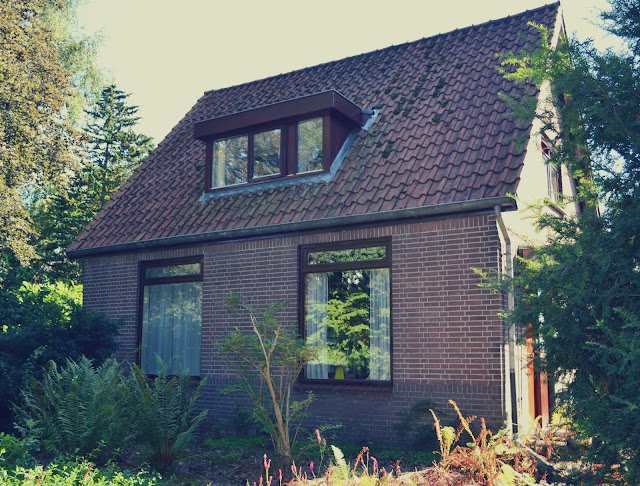 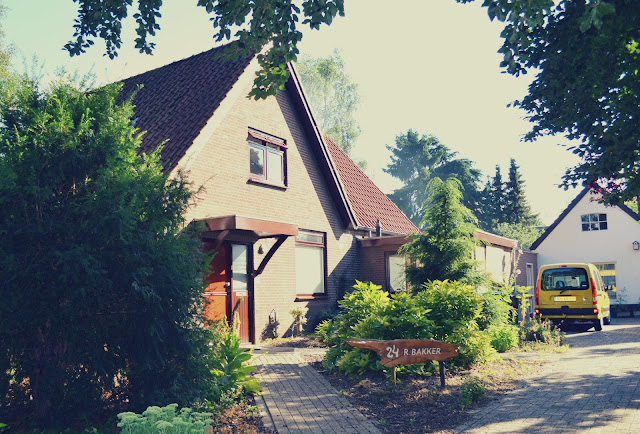 The home is on a large property, compared to most homes we saw that were not farms. My great uncle told me that they used to have massive gardens to help keep the family feed during the war years and the slow, rebuilding and economic recovery The Netherlands went through post war.

In the picture, directly above, the little white house behind the yellow van, used to be a barn. It was converted into another home on the property when my Opa and Oma were first married, not long after the war ended. They immigrated when my mother was a little girl and often came back to visit family in Nunspeet every few years.

The home is no longer in the family. However, it was purchased by a couple, of whom the wife, is an avid gardener. She has taken good care of the property. It was beautiful.

We rounded off the stay with my cousin Marina, by biking at night to the local civic center where we listened to an international, youth, string orchestra.

My visit to Nunspeet was almost surreal. It was this place I'd heard so often in stories, growing up. It was wonderful to bike around the streets and see with my own eyes, where the roots of my mother's family began.