I love digging in the dirt, wandering around my gardens, admiring my flowers and foliage, but, without my furry gardening buddies, those tasks would be a bit lonely.

Puma, or as he's lovingly called 'Pooka' has been my gardening companion for over eight years. He's was adopted by us as a kitten from a family friend whose 'barn cat' had a litter of unwanted kittens. Pooka was suppose to be my husband's cat but he found me more to his liking. He faithfully follows me around when I am working on the yard, always hanging around close by, but in typical cat fashion, not too close. 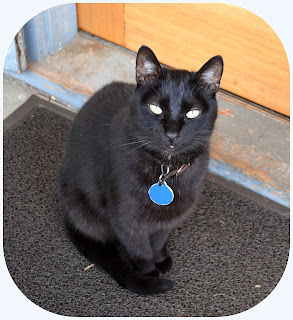 Three years ago, I was a social worker and one of my clients was interning at an animal shelter to gain job skills. My client was very happy and proud of the work she was doing. She invited me to visit the shelter and see how she was doing. Of course I had to go, but I was worried. You see I have a 'SUCKER' stamp on my forehead when it comes to shelter cats. I have a soft heart.

This silver tabby locked eyes with me during the above mentioned visit and my resolve was gone. He was six months old when we adopted him from the shelter, having been born at the shelter. He's a very affectionate fellow and guards my gardens well from moles and squirrels.

And thus our family was set. Cats, kids and a dog, I felt we were complete. We moved back into the Portland area and last fall, were settling in nicely. Then there was a tremor in the force.

Some friends of my dad had rescued a litter of kittens that their hillbilly neighbors planned to bag and toss into the Columbia River. Horrid, I know. So, kittens got passed out among folks and my dad ended with this gray little fuzzball. My dad tried to give him to my elderly grandmother, but the cat was such a terror that she couldn't handle him. So, she gave him back. Then he terrorized my dad's older cats. Something had to be done. I offered to take him. We attempted to name him something cute, like Bear Cub or Tommy, but no name we tried would stick. He harassed poor Puma around the house and Silver Cat was young enough to find him entertaining. He climbed up everything, bit our toes in the middle of the night and we thought he might be the devil himself with all the destruction he caused. So, the name Demon stuck. 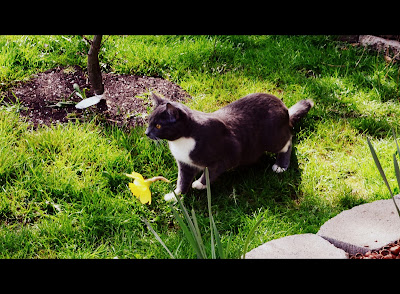 My furry gardening friends do not lack in personality. The three of them have been at my side all spring as I've dug up new garden beds, planted, watered, cursed, sweated and beamed with joy at my new creations. They entertain me, as they chase each other around, stalk wiggly weeds in the breeze and sometime dig holes where they aren't suppose too.

Gardening is more fun with my three furry critters around. The two human critters I have, aren't bad either ;)